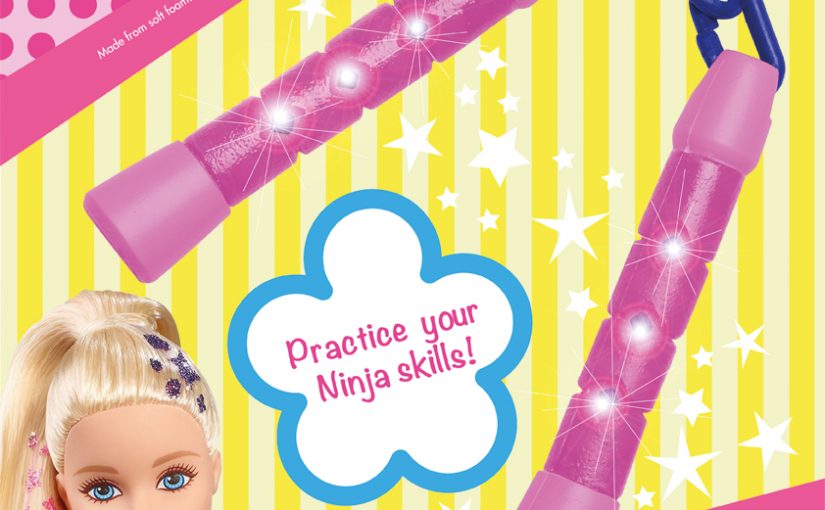 First idea (Barbie Nunchucks) based in part on the following in Delusions of Gender by Cordelia Fine:

If anyone’s still worried about today’s teenagers melting their brains on the Internet, there’s at least one who stands out against the crowd: teen activist McKenna Pope. In 2012 Pope’s four-year-old brother, who had a passion for cooking, was beyond excited to ask for an Easy-Bake Oven for Christmas. But, confused by the pink and purple colors and the television ads that only featured girls using the toy, he became discouraged.

Pope, thirteen at the time, was indignant that her brother should think any less of himself as a boy who liked to cook. Naturally Pope turned to the Internet. She posted a video and written petition urging the CEO of Hasbro to change its marketing and packaging around the Easy-Bake Oven to make it appealing to boys as well as girls. Pope could hardly anticipate what came next: She received 45,000 signatures and a call from Hasbro, inviting her to their headquarters in Pawtucket, Rhode Island to show her their new unisex designs. – https://www.ted.com/speakers/mckenna_pope

“When it comes to buying gifts for children, everything is color-coded: Rigid boundaries segregate brawny blue action figures from pretty pink princesses, and most assume that this is how it’s always been. But in fact, the princess role that’s ubiquitous in girls’ toys today was exceedingly rare prior to the 1990s—and the marketing of toys is more gendered now than even 50 years ago, when gender discrimination and sexism were the norm.” – https://www.theatlantic.com/business/archive/2014/12/toys-are-more-divided-by-gender-now-than-they-were-50-years-ago/383556/

“How toys are labelled and displayed affects consumers’ buying habits. Many people feel uncomfortable buying a boy a pink toy or a girl a toy labelled as ‘for boys’.” – It is no wonder that many toy manufacturers shy away from challenging stereotypes – it may affect their profits.” –http://lettoysbetoys.org.uk/why-it-matters/

“Over the past few years, people across the world have begun questioning this culture. In the US, for instance, a high-school student called Antonia Ayres-Brown wrote this week about a campaign she has pursued since 2008, when she was 11, to stop McDonald’s handing out their Happy Meal toys on the basis of gender. She recently received a letter from the company’s chief diversity officer, stating: “It is McDonald’s intention and goal that each customer who desires a Happy Meal toy be provided the toy of his or her choice, without any classification of the toy as a ‘boy’ or ‘girl’ toy.”

In Durham, UK, Tricia Lowther has been working equally hard. Her six-year-old daughter, Marianne, loved the Pixar film Cars when she first saw it, and in the supermarket one day, when Lowther was buying juice cartons, “it was a choice between cars and princesses, and I got her the Cars ones, sure she’d like them”. Instead, Marianne hid the cartons. When Lowther asked what was the matter, the answer was: “It’s boyish.” “I said: ‘But you like cars, don’t you?’ And she said: ‘I do, but I don’t want anyone to know.'” – https://www.theguardian.com/lifeandstyle/2014/apr/22/gendered-toys-stereotypes-boy-girl-segregation-equality

I decided to take Ninja Turtle’s Nunchucks, firmly aimed at boys, and aim them at girls.

Although I think the above advert would work it does reinforce stereotypes. It was something I questioned myself, is it worth reinforcing one stereotype to break another? Should it be a more neutral advert? My thoughts are that if this was a real product then in order to get girls to play with a boys toy reinforcing certain stereotypes might be the only choice. Children have been conditioned to associate pink with girls toys. If only one manufacturer decided to break the mould then there would be lots of other toys all conforming to the current stereotypes thus making it harder to persuade girls (in this case) to play with a boys toy. Having a gender neutral ad may not persuade a child that a once one-gender-only toy is now to be played with by everyone.